The Call To Missions 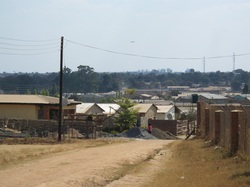 As a business student at Pensacola Christian I happened to have a roommate who was a missions major. I asked him where he thought the Lord would have him to go. He said Africa. I quite could not figure out how he was going to survive in Africa when he screamed like a little girl every time he saw a spider. No sooner I opened my mouth and uttered those words, the Holy Spirit pounced on the opportunity and said, “Well, you’ve lived there before, you know the land, the people, the culture, why aren’t you going?”

I struggled with that thought for years. I was now newly wed and working in corperate America. One fall Sunday night we had a missionary to Paraguay present his work in our church. He said he was born and raised in Paraguay, educated in civil engineering in the States, he had received bible training in his local church here. God has blessed him with so much and God had given him the knowledge of His word. He had been struggling with the call to go back to his homeland as a missionary. One Sunday morning his pastor was preaching concerning those who have heard the gospel and rejected it, and used Luke 12:48.” For unto whomsoever much is given, of him shall be much required:…”

He said the Holy Spirit started working on him as He did on me. You see not every Zambian has the opportunity of such great bible training and influence. Not every Zambian has the opportunities and resources to further the gospel among the people as I had. Much was given me and much was required of me. I was different from everybody else, God had a specific task and I was the man for it. And this time I knew exactly what I needed to do.

Many have asked why I would leave a salary and what seems as a steady life for the unknown? Well, all I know is, the Bible says in Luke 19:10, “For the Son of man is come to seek and to save that which was lost.” Jesus came with a heart of love for a lost and dying world. Just before His ascension to Heaven He looked to His disciples and said to them, “…Peace be unto you: as my Father hath sent me, even so send I you” (John 20:21)

It is for this reason that we believe the Lord would have us to take the gospel to the Zambian people. There are literally millions of Zambian nationals, who have never heard the message, that Jesus Saves, which most people take for granted. As a Zambian born American I am acquainted with the culture, which will allow us to break ground faster with the seventy people groups indigenous to Zambia. Both the need and the mandate are very clear. Jesus said, “…as my Father hath sent me, even so send I you.” How will we fill that need and accomplish the mandate of world-wide evangelism except, “they be sent”?